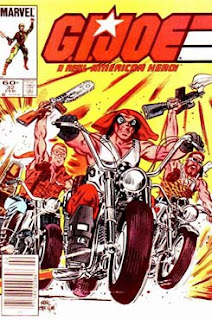 At about thirty-eight minutes in, we discuss, "The Real American Hero" of this issue.

Then at forty seven and one half minutes in to the show, we look at the nineteenth episode of the regular cartoon with "Lights, Camera, COBRA!".  This episode first aired October 10, 1985 and was written by friend of the show, Buzz Dixon.

Then 1 hour and 17 minutes in, we have Postbox: The Pit!, followed by The Solider of the Month!
Stay tuned after I say good bye for the monthly PSA, my closing credits and a our bloopers reel!
----
Podcast Promos:
First break:
The Star Bright Project:  One of the new shows on the Headcast Network, where my wife and I look at the tv show, Quantum Leap, episode by episode.  And occasionally we'll have guest hosts and special guests.

Fandom Network: Kevin's network of great shows with him and his buddies!

Retrospect of the 80's:  This is a show where Michelle and I look back at one of the greatest decades that was.  The 80s.


MASHcast - Where Rob Kelly and rotating guests look at one of the greatest military shows ever.

Zero Hour Strikes: A great show looking at the Zero Hour crossover from DC Comics, by our friends to the Great White North!

----
As always, we can be found here at http://gijoe.headspeaks.com and over on Apple Podcasts and Stitcher radio.
You can e-mail us at gijoe@headspeaks.com and let us know what you think!
If you want to send us an MP3 with your comments, feel free to do so and we'll play it on the air.
You can also find us on The Headcast Network.

While you're at it, leave some feedback either on our site, Facebook or over on Apple Podcasts.  Me and the team would love it!

Also, if you're enjoying the show, stop by http://patreon.com/HeadcastNetwork and throw a few shillings in the bucket!
Check out our Facebook page at: https://www.facebook.com/gijoearealamericanheadcast
----
Our guest hosts can be located at:
Jarrod Alberich "The Yard Sale Artist" Codename: Deathprobe! - Twitter @yardsaleartist and https://theyardsaleartist.bigcartel.com/
Kevin Reitzel Codename: Raider Nerd - Twitter @spartan_phoenix and https://fpnet.podbean.com/
Brad Abraham Codename: The Headcast Ed McMahon -  http://bradabraham.com/ or at Zartanhater@Zartansucks.com
Join us next month as we look at issue 33 of G.I. Joe: A Real American Hero and episode 20 of the cartoon.
Be sure to visit your local comic shop and check out the continuing adventures of G.I. Joe: A Real American Hero by IDW.  While you're there, look and see if there is anything else that strikes your fancy.
Joes, Dismissed!
Posted by Aaron Moss at 2:38 PM No comments:

Soliders of the Month